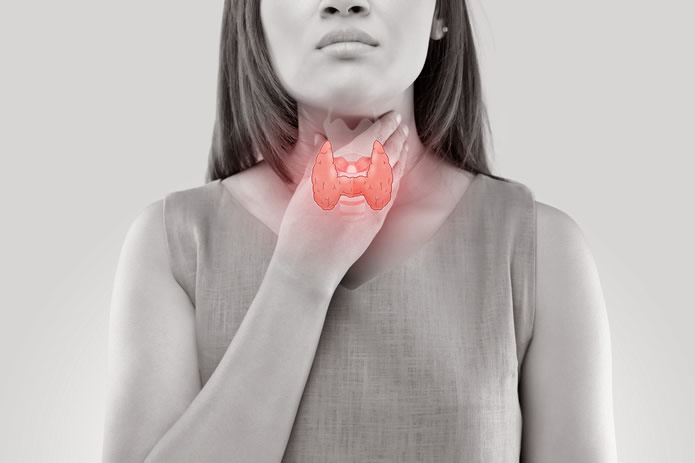 Thyroid nodules occur in about 15% of the general population. Most of these nodules are benign but can still grow and give troublesome symptoms. Some large nodules compress the esophagus and cause trouble swallowing. Others can become an unsightly lump in the low, middle part of the neck. Some can even push on the airway and give people shortness of breath, especially when lying down.

Up until now, the only treatment option for these bothersome nodules was surgical removal. If the nodule was on just one side, then a hemi-thyroidectomy or lobectomy could remove that half of the thyroid. If there were troublesome nodules on both sides, then a complete removal of the thyroid was needed. Today, Advanced ENT & Allergy is now offering a great alternative to surgery. This new procedure can shrink thyroid nodules without harming or removing normal thyroid tissue around it. The procedure is called radio frequency ablation, abbreviated RFA.

RFA is done in the office under local anesthesia. Dr. Keith Forwith recently became the ninth physician in the United States to offer this groundbreaking procedure. He stated, “the primary advantage of RFA is that it reduces nodules without surgery and leaves the functioning thyroid tissue intact, so that the patient doesn’t face a lifetime of hormone replacement.” The procedure is not painful and patients can return to work or school the very next day. The treated nodule shrinks the most in the first month after treatment but will continue to get smaller over the course of the next six months.

For hyperthyroid patients who have an overactive nodule, RFA is a new treatment alternative. Dr. Forwith commented “this is such a revolutionary option which allows treatment of these patients without the side effects and risks associated with radioactive iodine treatments. While surgery in our hands has always been a safer, less risky treatment for hyperthyroidism than radioactive iodine, we now have another option to offer patients with toxic adenomas.” RFA for these patients is safer, faster and doesn’t require long periods of treatment with anti-thyroid medications. The most common drug used to treat hyperthyroidism, methimazole, is not a safe long-term medication and can have numerous side effects.